FROM HUME TO DE LOLME

This is the well-known Humean idea of corruption as a counterpoise to the prerogatives of Parliament ("Of the independency of Parliament", 1741). Hume's influence is also felt in the choice of words: "L'ouvrage [...] du raisonnement & de l'expérience" (p. 23). But look at what happens in 1780. Gone are the implicit references to David Hume; his place has been taken by the (undeservedly) forgotten Swiss writer —and Rousseau's intellectual foe— Jean-Louis De Lolme [see] (*). Raynal introduced these changes with a sense of urgency. Indeed, De Lolme states that "chacun semble aujourd'hui tourner les yeux" towards the English Constitution.

I can think of three main reasons to explain the choice of La Constitution de l'Angleterre as a better guide to the British political system:

(1) Influence. The book was tremendously successful and, by the time Raynal was preparing his own revision of HDI, a new edition had been published, as well as an influential English translation [see]. John Adams, who in 1779 discussed politics with Raynal on a regular basis while in Paris, called De Lolme's book "the best defence of the political balance of three powers that ever was written".

(2) Method. Almost thirty years had passed since the publication of Hume's essay. De Lolme's account was seen as more up-to-date; crucially, the Swiss author railed against any account of the British political system that was "purely speculative", a reference to the writings of the beau génie of Montesquieu and, one would think, of Hume himself (who is only quoted as the author of the History of England). The authors of HDI shared similar concerns with the excesses of esprit systématique.

(3) Language. In line with the overall progress of the "republican spirit" in the second half of the century, De Lolme avoids any mention of the mixed constitution. There is talk of équilibre and contrepoids, but old Greek categories such as aristocracy and oligarchy are barely mentioned at all. In fact, he was credited with the creation of a new terminology — which was bound to seduce the authors of HDI. [see]. 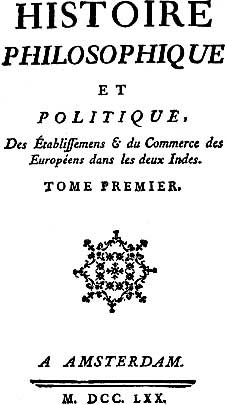